Hanazuki is the titular main protagonist of the animated web-series Hanazuki: Full of Treasures. She is a Moonflower who lives on her own moon, and her mission is to protect it from any evil forces threatening to destruct it. Whenever her moods change, she will also change colors, which are the keys to great power that could save the galaxy. These colors are usually seen on the highlights on her hair, and the tip of her flower-bud.

Hanazuki has fair skin, pink freckles on each cheek, and a pink nose as well. She has black or brownish-black hair, depending on the lighting, which resembles petals, with white parts inside serving as the highlights. On top of her head is a white flower-bud (known as the "Moodploom") resembling a dandelion.

She wears a white bracelet (known as the "Moodgleam") on her right hand, and a sleeveless two-piece skirt set which exposes an inch of her bare midriff. The top is completely black and the skirt is short with white trimming. She also never wears shoes. The white areas of her clothes and body glow different colors depending on which mood she is feeling intensely. Her skin also changes to pink in the dark.

"The titular protagonist of the series. A newly born Moonflower, Hanazuki is a kind, friendly, and optimistic girl who always offers help to those who need it. She is quick to adapt to her role as her moon's guardian, allowing her to understand and control her own emotions more successfully than most other Moonflowers."
—Wikipedia

Hanazuki is an optimistic, friendly and youthful individual. She also tends to be curious, innocent and naive about the outside world. Hanazuki is a very expressive character who reacts to scenarios around her with her colorful array of moods. Her strong connection to her emotions is her key attribute that makes her a powerful Moonflower.

Hanazuki is a natural Green Thumb. She loves tending to her Friendship Garden when she is stressed or in deep reflection.

Hanazuki is also a capable leader. When the need arises, she can lead the Hemkas and her friends to safety and out of harm's way, and they usually trust her on this.

Hanazuki's "birth" is shown in the first episode, "A Moonflower is Born" after a child-like being (later known as Little Dreamer) plants a strange flower seed on a moon using his breath. Once she appeared, she met a group of Hemkas who were frightened by her sudden appearance and ran away, thinking of her as a threat. Once alone, she wonders what her purpose is, and when Little Dreamer tells her to grow the treasure he has given, she is further confused. After getting feisty over the Hemkas fighting over the treasure, she grows her first treasure tree.

She falls into the flow of growing treasure trees as time passes, by the episode "Slow Sand Rises", she can already recognize all the signs that go with it. In the same episode, she grows a garden the treasures from her treasure trees which she affectionately calls their Friendship Garden.

In the episode "Friend or Foe", she finds out from Kiazuki that the massive black clouds nearing the moon are actually an evil force threatening to destroy it, and that the only way to prevent this evil force (referred to as the "Big Bad") is by growing treasure trees. Upon this discovery, Hanazuki takes growing and taking care of treasure trees more seriously.

In "Big Bad Sickness", as the Big Bad is slowly nearing her moon, Hanazuki feels more concerned. She starts to understand Kiazuki's pain over losing her moon, despite her anger showing otherwise. She is able to comfort her and because of this, Little Dreamer rewards Kiazuki with Treasures of her own. With Hanazuki's help, they plant a myriad of Treasure Trees, driving the Big Bad away for good and saving the moon.

She affectionately calls Kiazuki her "Moonflower Sister" in the episode of the same name on the account that Kiazuki is the only other Moonflower she has ever met. She tried to appease Kiazuki by giving her a tour but all attempts were met with less than positive feedback. When Zikoro chases Little Dreamer over a Treasure, Hanazuki discovers through Mirror Plant that he has been doing this in order to please his owner, who gets mad at him no matter what he does. Hanazuki takes the Treasure and talks to Zikoro about the relatable experience. She was scolded by the older Moonflower for touching the Treasure, leaving Hanazuki with an unpleasant feeling, leading to the growth of the first black treasure tree.

In the episode Only in Unicorn Dreams, Kiazuki harasses Sleepy Unicorn regarding his mysterious past, threatening to tell Hanazuki about it. She leaves without telling, but with Sleepy unwilling to talk, Hanazuki was left feeling scared of her Moonflower Sister and the unknown.

In Forgive and Forget, Kiazuki tries to take control of the moon, ordering everybody around and naysaying Hanazuki for her absence as the Big Bad attacks, blaming Hanazuki's prioritization on Doughy Bunington over the well-being of the moon and its residence. In Brain in a Cave, Kiazuki tricks the Hemkas into helping her leave the planet, taking some treasure trees with her. Hanazuki openly shows her disdain for her actions and personality in this episode and especially Homesick.

In Big Bad Sickness, she is able to understand Kiazuki's grief over losing her moon, and when she cries, she comforts her, recognizing she showed her true feelings. By doing this, she helps her grow her first Treasure Tree. Soon, both grow more Treasure Trees, which generate enough power to drive away the Big Bad for good.

Ever since she met him on Sleepy Unicorn's original moon in "Hide and Seek", she's willing to teach him how to grow proper treasure trees, as he managed to produce only black ones. Their relationship of now has been short, but somewhat affectionate.

An example of this is how Hanazuki runs out into the open when Twisted Unicorn is searching for them to find Sleepy Unicorn in "Better Together", risking her freedom and possibly her life for him. Further proof of this is when Kiyoshi feels another emotion for the first time when she does this. He turns pink, showing how grateful he is that Hanazuki is willing to do this for him.

Also, in "The Resistance", they get chased into a treasure tree by Twisted Unicorn, and Kiyoshi notices how the tree is the first he saw Hanazuki grow. Then, they use the tree's treasure juices to throw Twisted Unicorn off into a struggle between his emotions, causing him to be frustrated and fly off. When the episode ends, they fist-bump in victory and the screen winks out in the shape of a heart.

In "Damage Control", Hanazuki takes Kiyoshi to his moon, encouraging him to lead the Unicorns, and as he does, he glows lavender, giving him an idea on how to make the Unicorns work together.

Hanazuki was rescued by Maroshi from a falling asteroid in the episode "Recovery".

In "Feelin' It", Hanazuki is decided to help Maroshi grow a Treasure Tree. She and Kiyoshi devise numerous plans, but they all fail. Hanazuki then realizes that they shouldn't force any moods on him, but unlock the mood he is actually feeling. When Maroshi grew his first tree, a Black one, she acknowledges that Maroshi recognized the bad things that happened in the past (he couldn't do anything to save his moon), and now that he has let them out, he could overcome them. 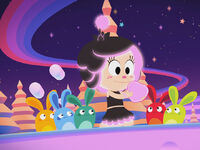 Retrieved from "https://hanazuki-full-of-treasures.fandom.com/wiki/Hanazuki?oldid=9923"
Community content is available under CC-BY-SA unless otherwise noted.