Leader of the Garlandians (formerly)

Kiazuki has pale, grayish skin, grayish freckles, and a black mask streaked across her eyes. Her grayish black hair is tied in a braid and has a black-to-white gradient going downwards. Like other Moonflowers, she possesses a flower growing from the top of her head, which resembles a bluebell. Kiazuki wears a black dress with a white part that cuts by the knees and black, open-toed sandals.

Kiazuki is a stubborn and manipulative Moonflower, being forceful towards others. She has never successfully grown a Treasure Tree and thus harbors within her an obsession in growing one. She sees that growing Treasure Trees is something that requires her to feel a positive emotion, not a negative one. Her selfishness has her prioritizing herself when catastrophe strikes, and she is willing to lie and abandon others to save herself. Despite this, she has been considerably "street-smart" in the series, knowing how to deal with hostile threats, handling vehicles, and recognizing different personas in the galaxy. She doesn't accept any type of help, as she wants to do things all on her own.

Throughout Season 1, Kiazuki was very manipulative of Hanazuki, trying to get her to do the things that she wants. Despite this, Hanazuki remained friendly towards her until she tried to talk the Hemkas into abandoning the moon with her as the Big Bad was coming in Brain in a Cave.

After her redemption, Kiazuki has started to become more tolerant towards Hanazuki, despite keeping her stubbornness. In season 2, this is more noticeable, such as in the episode "Dance on the Dark Side", where she sees no reason for there to be a Party Cube since she deems it as useless. She talks to Basil Ganglia about this, only for her to realize she was wrong.

Overall, Kiazuki is more realistic and grounded than Hanazuki, with both of them contrasting each other in terms of personality. She believes that a Moonflower must always be serious about their duty of protecting their moon.

Prior to the beginning of the show, Kiazuki lived in a seemingly infertile moon far away with her Alterling companion, Zikoro, until it was destroyed by a malevolent, nightmarish force: The Big Bad. After the incident, she had created a special force: The Garlandians, to help protect the moons.

After seeing Hanazuki's success from her moon, she visited to learn how to grow treasure trees on "Moonflower Sister", she was not able to leave because her ship was destroyed upon crash landing.

In "Big Bad Sickness", upon (temporarily) driving the Big Bad away, she and the other inhabitants of Hanazuki's moon rejoice, with Kiazuki boastfully declaring her victory. When Little Dreamer descends with a Treasure, she chases after him, but when he gives it to Hanazuki, she gets shocked and discharges her rage towards her, angry that Little Dreamer is always giving attention to Hanazuki and considers her his "favorite", while he has abandoned Kiazuki. 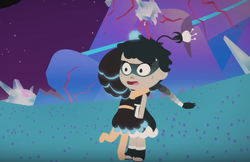 After nearly attacking Hanazuki with a Mazzadril, she concludes that no one understands how she feels, but Hanazuki tells her she does and hugs her, which makes Kiazuki glow blue and burst into tears, finally accepting her pain over losing her moon. Little Dreamer then descends and gives her and Hanazuki Treasures, and is finally able to grow her first Treasure Tree. In the end, Kiazuki, glowing pink, feels thankful for Hanazuki and hugs her, dropping her last Treasure, and planting a Pink Treasure Tree. 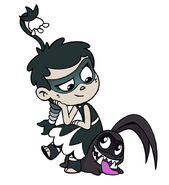 Add a photo to this gallery

Retrieved from "https://hanazuki-full-of-treasures.fandom.com/wiki/Kiazuki?oldid=9847"
Community content is available under CC-BY-SA unless otherwise noted.